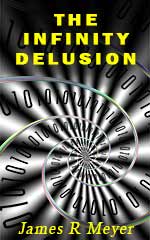 A book about the great divide in modern mathematics.

The Infinity Delusion is published by Alterologic as an eBook

Now in 3rd edition, available at all good online booksellers.

Buy the eBook at Amazon UK

Buy the eBook at Amazon USA

And maybe you don’t think it matters very much - but there you would be quite wrong. This book shows how mathematics has become divided into two quite disparate branches, where one branch is based on logical foundations, but the other is based on irrational Platonist beliefs and a failure to understand that ignoring the limitations of language can give erroneous results. This divide should not be confused with the quite different notion of the division of mathematics into ‘pure’ and ‘applied’ mathematics. It is commonly considered that ‘pure’ mathematics covers any mathematics which operates without any reference at all to the real world, whereas ‘applied’ mathematics is when mathematics uses pure mathematics as a base in order to solve real world problems. But the dichotomy that is the subject of this book is not about this distinction between “applied mathematics” and “pure mathematics”.

I wrote this book because I became aware as to how little attention is paid to the limitations of language although every time a statement is made that is supposedly logical, that statement must be made in some language. In conventional logical arguments, the limitations of language are almost always ignored. The consequences of this are particularly evident in mathematics, where there are theories that are based on the philosophy that numbers and other mathematical concepts are ‘actual’ things that ‘exist’ independently of any physical reality. Such beliefs are commonly held on an almost subliminal level; most people have never taken the time to carefully examine the basis and the consequences of such beliefs. It is because of such beliefs that detailed considerations of language are ignored - with the result that a detailed evaluation of the possibility of errors due to limitations of language is generally considered unnecessary.

Every statement has to be stated in some language. If assumptions are made that ignore some aspects of the language of the statement, then how can we be sure that the statement is entirely logical? Unless every aspect of such statements is very carefully analyzed, a statement that superficially appears to be logical may actually contain subtle errors of logic.

I decided to write this book because it became apparent to me that the belief in the ‘real’ ‘existence’ of mathematical concepts and the concomitant obliviousness of the limitations of language had resulted in mathematics becoming divided into two quite separate branches. It seemed to me that this was a major obstacle to the future progress of mathematics.

The reader should note that when I started working on this book, I took care to ensure that my approach would not be that one of the two branches was ‘wrong’ and that the other branch was ‘right’. At the outset, my objective was only to show that that while you could have two quite distinct mathematical systems, which are both logically valid and consistent, only one of them seemed to be applicable to real world situations. If I did have any preconception, it was that the theories of both branches were completely logical and coherent – and that the only essential difference between them was that one branch could be applied to the real world, and that the other branch could not.

But as I continued my research, it became clear that one of the branches is based on a number of concepts that are logically untenable, and which are actually contradictory - and that the entire edifice of this branch of mathematics is based on a few key proofs where the ingrained belief in the real non-physical existence of the mathematical notions that the proofs refer to means that any limitations due to language in these proofs are completely ignored. This book is the result of this research.