One often sees statements such as:

“For any given real number r, the probability of that real number being selected at random is exactly zero.”

This might appear to be rather a strange statement, so let’s look at what it involves. First of all we need to consider what the definition of probability is.

For real world events that have occurred, the probability value is in principle completely determined, although in reality some of the data is usually inaccessible. For real world events, one might assume that, given sufficient data, the calculated value is a reasonable prediction of the likelihood of a positive outcome in a future event. A probability value of 1 means that the outcome is certain to occur on every happening of the event, while a probability value of 0 means that the outcome can never occur on any happening of the event.

There are two ways to obtain a probability value:

In the first case, one can never be certain that the value is ever anything other than an approximation, that is, there is no guarantee that the value given by a particular sample used for the experiment will hold for future events.

In the second case, if one analyses the situation, one may be able to determine the relative frequencies of different outcomes of an event. For example, one may assume that for a perfect die, and given sufficient perturbation of the initial state of the die, the outcomes of any particular number between 1 and 6 occurring are equal and hence the probability of a random throw of the die being, for example, 4 is 1/6.

We now ask what does it mean to “select a real number at random ”?

So where does the claim come from that, for example, the probability of “selecting at random” the number 0.5 from the set of all real numbers is exactly zero?

and the assumption is that this has a value of zero.

If the x is a finite value, then it is correct that the limiting value of x⁄limitlessly large quantity is zero.

But why should one assume that x must be finite? If there is a hypothetical selection mechanism, and it can select a number, there is no sensible reason why it should be limited to only selecting a number a finite number of times. And as noted above, that actually leads to a contradiction. A hypothetical selection mechanism should be able to select infinitely many times, and by allowing x to be limitlessly large, rather than forcing it to be finite, we resolve the contradiction - if there is no limit on the quantity of selections that the hypothetical mechanism makes, then there is no limit on the number of times it will select any given number. And so we simply get the result that there is no calculable probability value that can be given for the “random selecting of a real number” since there is no real number value that corresponds to the notion of the ratio of a limitlessly large number to a limitlessly large number.

So a simple analysis shows that, unless one considers that the concept of the probability of “selecting a real number at random ” means in some way the selection of a real number by a human, the idea that one can assign a meaningful probability value to it has no validity whatsoever.

The pitfalls of making unwarranted implicit assumptions regarding the notion of “choosing real numbers at random” can be demonstrated by a consideration of an old chestnut, the Bertrand Paradox; the analysis can be seen on this site at the Bertrand Paradox.

For a simpler example the pitfalls are nicely shown by the following example (original page at If a real number x is chosen at random in… ):

The answer is given as: 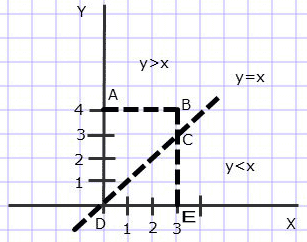 Thus the region x-y when plotted gives you a rectangle with base = 3 units and height = 4 units (as shown in the picture), giving you a total area = 4*3 = 12 square units.

Now, realize that y = x is a line that passes through (0,0) and (3,3) and divides the above rectangle into a trapezoid (ABCD) and a triangle. The area y > x will belong to the trapezoidal area.

So what does it mean here when it says “chosen at random ”?

So if it does not mean by some perfectly unbiased hypothetical selection method, what might it mean? Does it mean that if a human is asked to choose two such numbers at random, the probability is 5/8 that he will pick two numbers where x < y ?

So what is the ‘real’ meaning of “choosing a real number at random ”? Does it have any meaning at all?

The equation of itself says nothing about probability, but it can be applied as a model that gives a reasonable approximation to certain real world situations. It is simply an equation which defines a curve; for any given situation, it has two fixed parameters and a free variable which is the x in the graph. For the case of human height, the x can be used to represent the height, but note that the y in the graph does not represent a probability value. The calculation of the integral (the area below the curve) between two height values gives a value that is a good approximation to the real world probability of selecting at random a human whose height lies between those values. The equation is such that the total area under the curve is 1.

However, if you try to obtain the value of the integral (the area below the curve) at a single point, you get the result of zero. It would be a mistake to think that that means that the probability of selecting a person whose height is that particular value is zero. That would be a failure to understand the limitations of applying an idealized mathematical model to a real world situation.

Vitali’s paper “On the problem of measuring sets of points”