Thinking and Being by Irad Kimhi

In some quarters Irad Kimhi has been touted as the next great but overlooked philosopher.⁠ (Footnote: See, for example, Unpublished and Untenured in The New York Times, True or false? in The Times Literary Supplement, or On Irad Kimhi’s Thinking and Being by Steven Methven in The Point Mag.) In the introduction to his book “Thinking and Being”⁠ (Footnote: Irad Kimhi, Thinking and being, Harvard University Press, 2018.) Kimhi sets out his areas of concern, much of which is based on the ideas of Parmenides, and which criticizes some of Frege’s ideas. 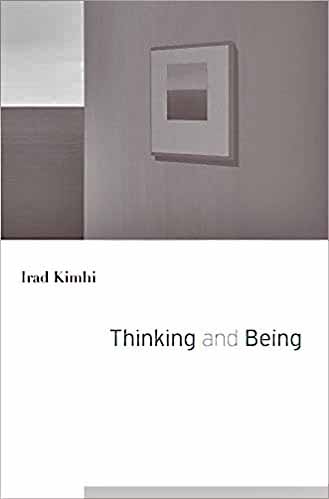 In the introduction Kimhi states:

Put briefly, philosophical logic cannot attain the sort of mutual illumination to which it aspires unless it is able to reveal that there is no logical gap between the premise and the conclusion in each of the following two inferences - from 1 to 2 and from 1* to 2*:

2. We who think that he is pale are right. (We think what is true.)

2*. Those who think that she is pale are wrong. (They think what is false.)

Correctly viewed, such inferences manifest the dependency of the truth or falsity of a judgment on what is or is not the case.

But there isn’t any difficulty here, apart from the imaginary one created by philosophers misreading the situation. One only has to consider that such expressions do not exist in a vacuum; they belong to a language system, the language system of some human or machine, and these language systems need not be identical for all expressions. Consider two cases:

There’s no difficulty there. There is only a problem if one disassociates statements 1 and 2 from the language and logic systems to which they can belong. The assertions 1* and 2* can be treated similarly.

Kimhi then talks about some of Wittgenstein’s remarks, referring to:

… puzzles that arise from the use of the veridical verb [“is” means to be true or to be the case] in making seemingly straightforward points about the truth and falsehood of positive and negative judgments. Let us consider two such remarks by way of preparation for considering a third. The first concerns the falsehood of a simple positive judgment:

How can one think what is not the case? If I think King’s College is on fire when it is not on fire, the fact of its being on fire does not exist. Then how can I think it?

The second concerns the truth of a simple negative judgment:

Both of these puzzles are concerned with saying or thinking something that is not - that is therefore nothing.

Kimhi Goes on to remark about these “puzzles” that:

The aim of this book is to show that these puzzles pertain to the logical validity of certain inferences - forms of validity which are expressed in what I call the syllogisms of thinking and being. Here are two examples of such syllogisms:

Again, there is no difficulty here whatsoever, except for the artificially created imaginary difficulty dreamt up by self-absorbed philosophers who fail to see the obvious. There is clearly a crucial difference between the person A stating (1) (2) and (3) and some other person stating (1) (2) and (3). In the former case one would say that such a person is not rational, whereas for the latter case there is no problem.

This simply demonstrates the utter folly of attempting to make a logical analysis of expressions without taking full consideration of the language system that they can logically belong to, and instead concentrating on some sort of notion of the absolute “truth” of the expressions.

it is evident that philosophers have managed to tie themselves into convoluted knots over this issue, an issue that is easily settled by a simple consideration of the language system that an expression belongs to, see also Natural language and reality.