The Shackles of Conviction 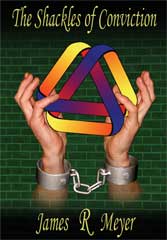 A novel about Kurt Gödel and his Incompleteness Theorem

Available at all good online booksellers.

Buy a paper copy or the eBook at Amazon UK

Buy a paper copy or the eBook at Amazon USA

The question “What is ‘truth’?” is a question that Ralph McNeil, a down-to-earth engineering student, has never before had cause to ponder. But when he encounters a famous theorem (Gödel’s ‘Incompleteness Theorem’) which poses a seemingly unsolvable puzzle about the very meaning of ‘truth’ itself, he becomes convinced against all the prevailing wisdom that the theorem must be wrong - despite the fact that it has been accepted as correct for over eighty-five years.

He sets out on a journey to prove it wrong, a journey that becomes a quest to seek out the ‘truth’ about ‘truth’ itself. As he pursues his mission, we see into the heart and mind of Kurt Gödel, the enigmatic character who first posed the theorem - a man who won acclaim as the greatest logician of his time, but whose deep mystical convictions would eventually drive him to the brink of insanity.

Fact and fiction, past and present are intertwined in a compelling story of love, intrigue, deception and death that leads to a startling conclusion that will change forever the way the world understands the concept of ‘truth’.

I felt impelled to write this book for two principal reasons.

One reason was that, having come to a very clear understanding of Gödel’s incompleteness proof, I wanted to give an analysis of that proof and the inherent flaw in it, in terms that are as accessible as possible. Any liberties that I have taken with definitions and technical terms do not affect the principles involved.

The other reason was that for me, the life of Kurt Gödel was a fascinating jumble of facts that never seemed to fit together. I found either a reverential portrayal of an intellect of superhuman proportions, or else a portrayal of a pathetic figure incapable of normal human existence. I thought I could perhaps give Gödel a human face that would in some way fit in with the salient facts of his life.

While it is a work of fiction, I have tried as far as possible to work to a framework of real events that occurred during Gödel’s lifetime. The dates of such matters as his graduation, publication of his Incompleteness Theorem, his marriage, mental breakdowns, lecture tours, the deaths of his acquaintances and other similar events are all approximately correct.

This book turned out very much as I wanted it to be, a book that can be read simply as a work of fiction, but also explains mathematical discoveries and concepts as part of the story in as simple a manner as possible.

I know that to many people, mathematical discoveries might seem a rather dull backwater. But the story of how a man might become obsessed by a search to discover a flaw in a mathematical proof, when every mathematician in the world says that it cannot be done is a story that I could not resist - especially when I could also tell the story of the man who first posited the theorem, a man who was quite unable to cope with the possibility that it might be wrong. It is a story that I would very much like you to read.

This novel is written as two intertwined stories; one is about Ralph McNeil, and is set in the present day - the other is about Kurt Gödel, born a hundred years ago. Note that the following is a spoiler, so if you want to read the book without such information, stop right here - but you can read an excerpt from the first chapters at Book excerpts.

Ralph McNeil is a down-to-earth engineering student who would usually have little time for a discussion about the meaning of ‘truth’, but when he encounters Patricia Danielli, a striking philosophy student who has views diametrically opposed to his own, he surprises himself by starting to become interested. When Patricia tells him that there is a theorem, known as Gödel’s Incompleteness Theorem, that actually gives a sentence that must be true but which can never be proved to be true, Ralph is adamant that it must be wrong.

What Ralph does not know was that ninety-two years earlier, a certain child had seen a vision of paradise that was to be the driving force of his life. His name was Kurt Gödel.

Thirteen years later Kurt Gödel is studying logic and mathematics in Vienna, where he meets and fell in love with Adele Nimbursky. They are still together three years later when Gödel makes an amazing discovery which will change the history of mathematics. Gödel becomes recognised as an outstanding genius as his theorem is universally accepted as a major turning point in the foundations of mathematics.

Keen to keep in with Patricia, Ralph decides to go to a public lecture on Gödel’s Theorem given by Professor McHarton. The professor, in an attempt at levity states that a prize of 28 million euros will await anyone who can come up with a refutation of Gödel’s theorem by the following year’s annual public lecture. Ralph immediately resolves that he will take on the challenge - and win. Patricia agrees to help him, albeit somewhat reluctantly.

Just three years after the publication of the theorem, Professor Hahn, Gödel’s former tutor points out a problem with the theorem that shakes Gödel to the core. Hahn is so disturbed by Gödel’s mental state that he assures him that he will not immediately publicise the problem. Gödel is admitted to a sanatorium where he stays for several months. Then Adele discovers that Hahn is to undergo an operation for cancer. The day before the operation, she and Gödel visit Hahn, bearing a gift of chocolates. Hahn dies the day after his operation. The next day Gödel is seen rummaging through the papers in Hahn’s office.

As Patricia learns more about Gödel, she starts to have doubts about Gödel and the universal acclaim accorded to him. She wondered why Gödel never seemed to follow up on his great theorem, almost appearing to want to leave it one side. Ralph, who has been making great progress in his understanding of the theorem, has now persuaded her that the theorem must be flawed.

After Hahn’s death, although Gödel suspects that Adele had poisoned Hahn, his depression gradually lifts. But just eighteen months later Gödel is hit by yet another hammer blow when Professor Schlick tells him that Hahn has told him about the problem in the theorem. Schlick gives Gödel just one year to prepare himself before he must publish Hahn’s discovery, and Gödel once again falls into a deep depression. Adele discovers that Professor Schlick has one particular enemy, a man named Hans Nelböck. She arranges to meet him. As she talks to him she goads him, fuelling his hatred for Schlick. Suddenly Nelböck takes out a gun and leaves her; an hour later Schlick is dead, shot by Nelböck.

Shortly before the academic year is due to end, Ralph is depressed. Perhaps, he now thinks, the meaning of Gödel’s theorem might simply depend on what you mean by the word ‘true’. He is also worried that he might not have done enough study to pass his end-of-year exams, and yet he is unable to concentrate to study for the exams.

After Schlick’s death there is never any further mention of any problem with Gödel’s theorem. Adele and Gödel emigrate to America and Gödel takes a prestigious job in Princeton. But Gödel is always waiting, always dreading that the problem in his theorem will be re-discovered. And always he is looking for another theorem to take its place, another great theorem that will establish him forever as the greatest logician of all time.

Gödel never finds another theorem to take the place of his Incompleteness theorem. In his old age, his dreams unfulfilled and his heart weary, Gödel makes his final decision - to starve himself to death.

Read an excerpt from the book: Book excerpts.