Professor Ulf Persson is a committed Platonist apologist and has written several articles in support of Platonism. This is a review of his article Logic and Mathematics: an inquiry into mathematics and Platonism, which appears to be the culmination of his thoughts over a period, see some other articles on Platonism at Ulf Persson Platonism page.

Is it really too much to ask that apologists for Platonism confine themselves to providing evidence for the independent existence of Platonist mathematical entities? And even if they cannot provide direct evidence, surely they should understand that circumstantial evidence must be at least of a standard comparable to that which would satisfy a court of law? But seemingly not.

In common with many others, Persson refers to the notion that mathematicians often claim that they make discoveries. This old chestnut is long past its sell-by date, and is easily countered by the simple observation that given any initial set of statements with an associated set of rules by which one can generate further statements, then one can make discoveries that are new statements that were generated in this way.

This observation is often referred to by an analogy to the game of chess; in chess, given the rules, 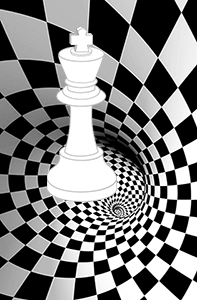 you discover some things that can be done, and some things that can’t. Obviously, such discoveries do not imply that chess or any of its possible moves somehow always had some sort of independent existence prior to the invention of chess. While Persson admits that the notion of discovery “…hardly counts as proof ” he spends a lot of time pushing the claim that the chess analogy is not a good analogy to mathematics. But the chess analogy is not necessary to debunk the notion that mathematical discoveries support the concept of Platonism, it is only an analogy that provides a concrete example that can arise from the more abstract concept of an initial set of statements with an associated set of rules.

Later on, Persson appears to think that opinions can serve to settle the question: (Footnote: See, for example, Dishonest tricks used in Arguments, A List of Fallacious Arguments, Fallacies - The Internet Encyclopedia of Philosophy, Logical Fallacies Handlist, Wikipedia entry - List of Fallacies. ) He says that:

“C.S. Peirce claimed that the integers are more fundamental than logic itself ”

but this is merely an opinion that does not advance Persson’s case at all.

Persson appears to have a bizarre antipathy towards logic per se, stating that

which makes one wonder how he expects to convince others of his views when he is thereby questioning whether there is any soundness of the logic used in arguments, including his own (if there is any logic behind them).

Persson asserts that in mathematics:

“we should not just think of end results, such as theorems, but should include the whole deductive derivations from first principles”

and then makes a fundamental error when he makes the outrageous claim that:

“The correctness of the latter can in principle easily be checked mechanically, while theorems famously cannot in general.”

This is quite obviously false, since a mathematical theorem is supposedly the result of a proof that results from the rigid application of a fixed clearly defined set of rules to a fixed clearly defined set of axioms, and so any valid proof can be, in principle, checked purely mechanically, even if we have not the means to do so at this point in time. The fact that many theorems make leaps over several deductive steps does not alter the fact that a valid proof must always be reducible in principle to such singular steps, and, in principle, a sufficiently intelligent autonomous system could perform such reduction. A claimed ‘theorem’ for which this does not apply therefore cannot be a valid theorem.

Moving on to the next fallacy, Persson states:

That is an unproven claim that amounts to a claim that humans cannot possibly utilize any some sort of algorithmic process in their attempts to generate a mathematical result. This is the same sort of brazenly illogical and unfounded claim that Roger Penrose has also attempted to hoodwink us with. (Footnote: See Man versus Machine. )

Persson makes the claim that:

“the magical interconnectedness of mathematics is at least psychologically a very strong case for its independent ontology.”

and remarks on the:

“remarkable consensus that characterizes the fruits of mathematical practice.”

Presenting that as though it were evidence for Platonism implies the completely unfounded assumption that there could not be any other cause for mathematics appearing to be interconnected. Besides, if it is the case that any challenge to what is conventionally deemed to be mathematics is summarily rejected as ineligible for inclusion in any mathematical journal, then of course that will give the outward appearance of a homogeneous mathematical realm. But it should be borne in mind that there is a fundamental difference between a claim that mathematics itself is Platonist - that is, that Platonism is a “true reality” - and the fact that many mathematicians have Platonist beliefs. The latter does not imply the former. Good communications between mathematicians does not imply some sort of underlying Platonist reality, but can be simply an instance of the case where the better defined a subject is, then the easier it is to communicate within that subject without any ambiguity.

Persson then claims that:

“the properties of a mathematical object are not regulated by its putative inventor.”

“You do not need to know the formal rules of logic doing mathematics, somehow, as we noted above, you intuit them.”

This is so ill-informed as to be utterly laughable. The fact is that a novice does not have such intuition, he has to learn these rules. Persson’s so-called ‘intuiting’ of the rules of a subject is obtained in part by the teaching of rules and in part by observing the patterns that occur over a large number of worked examples.

Later on Persson makes an hilariously false comparison. He refers to a non-Platonist asking:

“how could we communicate with [the Platonist non-physical] world ?”

and compares this to asking:

“how does gravitation act over distance? ”.

But these are as different as chalk and cheese. We don’t even have to assume that there is a ‘thing’ that is ‘gravity’,

we need only observe that there is a certain property of the real world for which we may have different explanations in the form of theories, as a force, as a warping of space, as a field, as gravitons, or as strings, but there is a universal acceptance that such theories are attempting to describe an aspect of the real world. No-one can reasonably deny that the relative motion of masses are not independent or that their mutual interaction acts over a distance, or that those effects have a speed of propagation. Moreover, these effects are measurable and such measurements are repeatable. All this implies that this involves some sort of physical interaction between physical objects, rather than by some supernatural means. But in Persson’s case, the fact is that:

Persson’s arguments bear a striking resemblance to the ‘god of the gaps ’ argument of religious apologists, since his argument relies on the assumptions that humans can obtain knowledge of a Platonist non-physical realm, and the answer to ‘how can they obtain such knowledge’ is some sort of non-physical cause, which is the same illogical plea as a ‘god of the gaps ’ explanation.

“…[mathematical Platonism] is beyond our reach, but [is] the ultimate motivation for our mathematical efforts.”

Here he confuses the motivation for mathematical inquiry with a justification of the presumption of non-physical existence, and while he deplores any analogy of Platonism with religion, in the same way it would be absurd to claim that a religious believer’s motivation for a belief in the supernatural in some strange way justifies the presumption of the existence of the supernatural.

“The problem really becomes embarrassing when we enter Cantor’s hierarchy of infinities. In what sense do they really exist? ”

But the admission that one Platonist can claim that they do exist, while another Platonist is not sure whether they exist, seems to indicate that Platonism is, after all, a purely subjective notion bereft of any evidence to support it. One cannot help but make the observation that in a similar way, there are numerous different religious sects that each claim to have their own ‘correct’ belief of what is and what isn’t, and that the real reason for their differences is that there simply is no evidence to support their beliefs one way or the other, and nor is there any reason to suppose that any such evidence will ever be discovered.

For more on Platonism, see also Platonism, The Myths of Platonism, Numbers, chairs and unicorns, Platonism’s Logical Blunder, and the blog Descartes’ Platonism.

And for further reading there is Let Platonism Die by Professor Brian Davies, and a reaction Let Platonism Live by the Ulf Persson referred to above.

Diverse opinions and criticisms are welcome, but messages that are frivolous, irrelevant or devoid of logical basis will be blocked. Difficulties in understanding the site content are usually best addressed by contacting me by e-mail. Note: you will be asked to provide an e-mail address - any address will do, it does not require verification. Your e-mail will only be used to notify you of replies to your comments - it will never be used for any other purpose and will not be displayed. If you cannot see any comments below, see Why isn’t the comment box loading? Note that comments with a substantial amount of mathematical terms not properly formatted will not be published unless a file (such as doc, tex, pdf) is simultaneously emailed to me, and where the mathematical terms are correctly formatted.