Fake news might be described as material that is fabricated without any supporting evidence, and which is presented in such a way that naive observers are willing to believe the material without subjecting it to any detailed examination, especially if it concurs with their underlying philosophy. 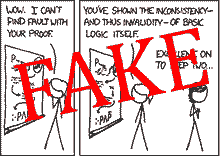 In a similar vein, fake mathematics might be described as material that is fabricated without any supporting evidence, and which is presented in such a way that naive observers are willing to believe the material without subjecting it to any detailed examination, especially if it concurs with their underlying philosophy. 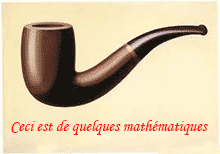 submitted his paper on Incompleteness⁠ (Footnote: Gödel’s paper was written in German, it can be seen at Gödel’s original incompleteness paper. An English translation of the paper is entitled “On Formally Undecidable Propositions of Principia Mathematica and Related Systems”, viewable online at Gödel’s Incompleteness paper - English translation:.) to various journals. Unfortunately for Gödel, in this mathematical world, all the reviewers rejected his paper because (as in our actual world⁠ (Footnote: Peter Smith, although a staunch advocate of Gödel’s proof, acknowledges this in his paper, Expounding the First Incompleteness Theorem, that, “Gödel only sketches a proof… The crucial step is just asserted.” )) it failed to prove a crucial step in the proof, and Gödel merely assumed that the crucial step (the Proposition V in his paper) was correct. This was completely unacceptable to the reviewers, and Gödel’s paper was never published in this hypothetical mathematical world.

And in this mathematical world, the same happened with another paper that Gödel submitted, and since it had a similar intuitive assertion, it was also rejected. Eventually, in this hypothetical world, someone else actually did a rigorous assessment of Gödel’s work, and proved that Gödel’s intuitive assumption stated precisely the opposite of what was actually the case (and in our actual world, this in fact happened about 50 years after Gödel first wrote his paper - for details of this see Gödel’s Intuitive Error No.2).